More imagery--Minami Sanriku and beyond -- and tsunami erosion 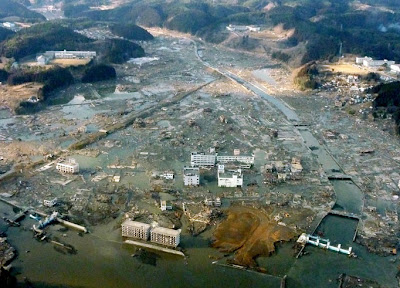 The oblique air photo above (by "yaozy"), available on Google Earth, shows dramatic tsunami scour features in the Minami Sanriku harbor. It also gives a better sense of the area I walked around in April of 2010. Finally I can faintly see the baseball diamond near the (destroyed) river gate, and get a sense of the tsunami erosion around the large apartment building at the shoreline, a building designated for vertical evacuation. I still don't know how many people used this building for evacuation, and if so, did they successfully get onto the roof because the upper floor was flooded.

I have been readjusting to life back in Seattle, trying to finish up several manuscripts that got pushed aside by the events of 11 March. These manuscripts deal with neotectonics and tsunami history of the Kamchatka Peninsula.

The other day, we were trying to imagine "life before Google Earth." I remember life before photocopy machines, let alone word processing! I was rereading a classic, early article by Minoura on a Kamchatka tsunami deposit, and wondering if we could relocate his sites. So much of Minoura-san's materials will have been destroyed by the earthquake in Sendai. I realized his work was not only before Google Earth and GIS, but probably done without GPS.... Though we had handheld GPS in our post-tsunami survey in Nicaragua in 1992, it wasn't working very well. Funny, there were two sets of maps -- the Nicaraguans had maps prepared by the Soviet Union for the Sandinista regime, and we from the U.S. had maps prepared by the U.S. Defense Mapping Agency, which said "destroy after using." The "KGB" maps were more accurate than the "CIA" maps.... Of course, air photos are still the best for on-the-ground location, though post-tsunami, things change. And some countries are not so enthusiastic about providing/ making public their air photos. How things are changing now with so much on the web.

for posting some good links, such as:
http://google-latlong.blogspot.com/2011/04/post-japan-earthquake-panoramas-in.html
The title of this panorama project should be "japan-tsunami-panoramas" though.

From Google Earth, I found a newly acquired image of the harbor of Minami Sanriku that shows clearly severe tsunami erosional features, which by their looks are mostly from the outflow -- Bre MacInnes will be interested to see these. Part of her dissertation was about tsunami erosion, particularly by the 2006 (or 2007) central Kurils tsunamis.

Here is a before image of the Minami Sanriku harbor from June 2010: 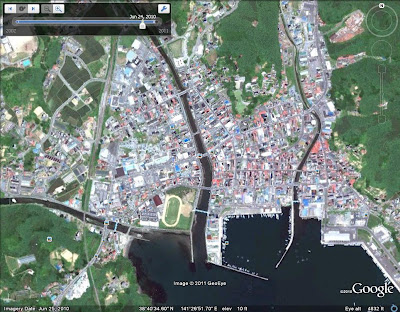 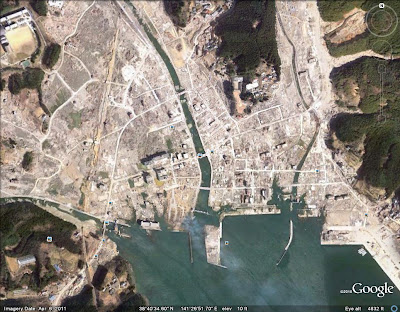 and my rough attempt (I did not orthorectify the images) to outline before and after shorelines, as well as the scour ponds made by the tsunami: 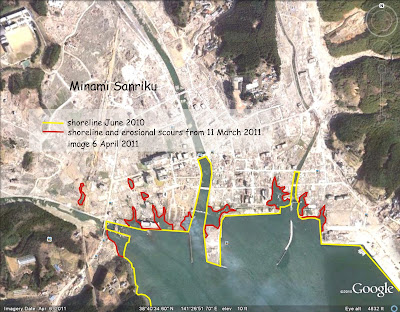 OK, back to my manuscripts.
Posted by JodyB at 2:06 PM

JodyB
I am a professor in the Department of Earth and Space Sciences at the University of Washington, I was visiting Hokkaido University Jan-March 2011. I am a sedimentary geologist who has been studying tsunamis since the late 1980s.